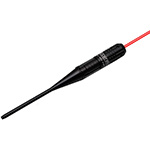 This universal precision Laser Boresighter comes with 4 different bore adapters to fit any 0.22 to 0.50 caliber pistol or rifle. Select and adjust the proper barrel adapter, slide into the barrel and center the scope crosshairs or iron sights on the red dot. Lightweight and durable with a long sighting range., this laser bore sighter provides for quick and accurate sighting of any rifle or handgun Sights (Iron, Optical, Laser, Holographic, Etc).

The sighter uses three LR44 (also called AG13) batteries installed with the + side toward the pin of the battery holder as shown below.

Turning the Laser On and Off

NOTE: With the laser fully screwed down, it can be difficult to rotate the battery case. It is easiest to unscrew the top a few turns to loosen it, then turn the laser on or off by rotating the battery case, then tightening the top again.

Before using the laser bore sighter, an adapter must be installed on the end of the bore rod. Select the correct adapter for the caliber of the firearm (see the table below). First, screw the screw (included) onto the adapter, then screw it into the bore rod using the included screws. As the adapter is tightened, it will flare out. Adjust the adapter by tightening or loosening the screw so that it fits slightly snug into the barrel.

The laser light emitted from the laser bore sighter travels in a straight line while the bullet follows a trajectory. Use of this device will get your firearm sighting very close, however, final adjustment should be made at the range.

MAKE SURE YOUR FIREARM IS UNLOADED BEFORE PROCEEDING

Install an adapter on the bore sighter for the caliber of the firearm as described above.

Turn the laser on as described above.

Adjust the sights to place the projected laser dot on top of the front sight blade. The distance for sighting iron sights is not nearly as critical as it is with scopes, however, the greater the distance, the greater the accuracy.

WARNING: The laser is aligned at the factory. Unless realigning it is necessary DO NOT adjust the four hex key screws around the laser, as this will invalidate the factory calibration.